If there’s one thing that motivates me to do things in life, it’s obsessions. Right now I’m obsessed with a few things in particular: The Witcher, Vikings, and Gym. I’m combining my obsessions for an even greater chance of actually doing something useful with them. I know what you’re thinking: are you going to drink like a viking? First of all I don’t have a horn to drink out of, I wish I did but I don’t. Secondly, I’d prefer to fight like a viking, the drinking can come later. There’s something about walking into a gym with confidence, with the anger in your belly, the fuel to throw your body into any physically demanding challenge and win. I want to be strong. And muscular. I want to have Henry Cavil’s body, the Witcher’s body. I’ll settle for the female equivalent of the Witcher’s body. There’s something so invigorating about gym, about running and lifting, pushing and pulling. About being the best viking version of myself. It’s this feeling down deep inside you that you’re a badass and you could take on all these guys in the gym with your determination alone. I love that feeling, I embrace the anger and use it to keep pushing myself.

On YouTube there is a video of Henry Cavill discussing what exercises he does to get into the right shape to be the Witcher. So I’m going to train like the Witcher. You might think, but Jess, you’re a girl and you’re weak as shit, you can’t even do a pull up. Which is why I’m going to train like a Witcher within my own weight range obviously. Also there was another time that I was obsessed with gym and trained to the point of doing a pull up, I want to get that back. From the video, a few exercises are discussed:

I already have my own routine exercises that I like to do as well that help with being strong for climbing and act as antagonist training:
I’ve only recently discovered how much better everything is with cardio included in workouts. I can feel like absolute shit, down in the weather, generally depressed and as long as I have enough motivation to go running, I’ll feel so much better. Its as if these bad feelings wash away and can’t take hold in my brain for the hours after the cardio. It’s one of those rare times when my brain has no worries to overthink.

The other time I can get rid of negative feelings is when I’m doing yoga and the flexibility and strength that comes with yoga helps with the other things, to balance out my body and feel less pain the morning after a work out. So I’m doing daily yoga this month as well. It helps that I have my sister to do it with me everyday; we keep each other accountable for actually doing it and meeting our goals.

I believe in being generous with yourself, giving lots of space to find what’s easy on you and not letting the guilt of not working hard enough ever get in the way. Theres always a time when its best to be gentle and not over do it. Burn out can be really devastating, getting overwhelmed can stop all productivity in its path. But sometimes you gotta push yourself, you have to distract your brain with challenges that require all your focus, find that mental toughness that can help you achieve the goals you set out to achieve. You have to get angry and know that you have what it takes to finish things. Lean into that feeling of being a badass because it will get you through.

What better time to start training to become a Witcher than the beginning of the year, that special time of year when everyone takes it upon themselves to make improvements and become a better version of themselves. So I challenge you to train like a Witcher and become your true viking self. Let the determination fuel you. 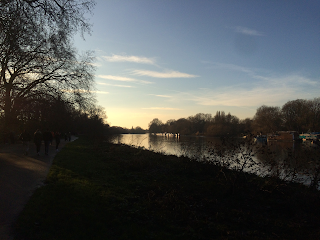